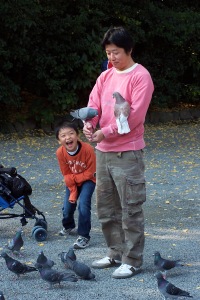 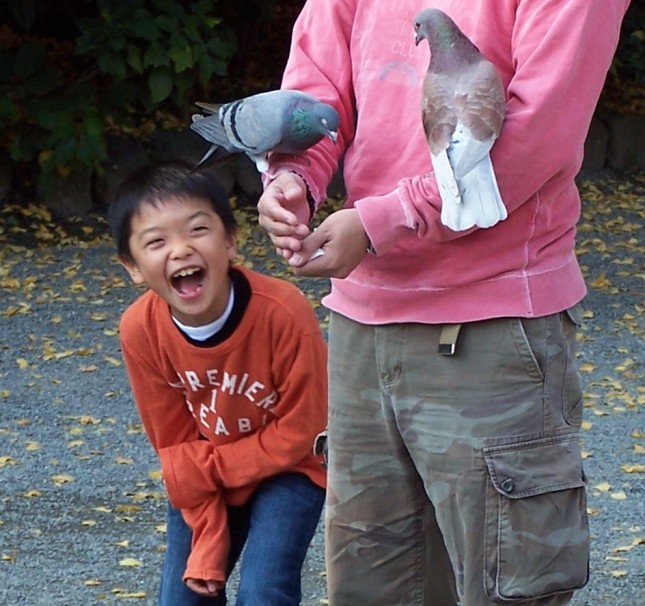 Today’s post started out as a belated response to last Monday’s Weekly Writing Challenge: Truth Is Stranger Than Fiction over on the Daily Post, in which we were asked to take or find a photograph in which the subject showed true joy, rather than that I’m-smiling-for-the-camera brand of fake happiness. I had bookmarked this photo in my archives last week, but my postings went in other directions and I couldn’t find a day to squeeze this one in. (What?! Too many blogging ideas? Must we start two-a-days?)

The truth behind the photo: I took the original photo (top left) during a visit to Hachimangu Shrine in Kamakura, Japan, in November 2010. I noticed a family feeding the pigeons, and snapped a few random shots in passing, without really stopping to compose the images. It wasn’t until I was back home reviewing the pictures from the day that I noticed that the little boy found it HILARIOUS that his father was covered in pigeons and I wished I’d focused my lens on him rather than just the overriding family scene. I wanted to draw the viewer’s eye to the boy’s shiwase (happiness), so I tried cropping the original shot (top right) to get rid of the empty baby stroller that was on the left side (his younger sister was standing tentatively on her own a few feet away, surrounded by a dozen pigeons), but by trying to keep the same scale, also eliminated the birds around the dad’s feet. I hate creating headless corpses when I edit photos, but in the bottom version the boy is much more the center of attention, although the severity of the cropping has highlighted the fact that he is out of focus. Now I wonder if I’ve removed too much of his body language for the viewer to truly appreciate the extent to which he was enjoying this close encounter of the feathered kind? Other than the obvious advice to be more thoughtful in the way I initially shoot my subject, any feedback on how I should have edited this image to highlight the little guy’s happiness would be appreciated.

Now I veer off the track of the original prompt, and contemplate the contrast between the shiwase in my photograph and the emotion the entire nation of Japan is likely feeling today. March 11, 2013, marks the two-year anniversary of the devastating Tohoku earthquake and its resulting tsunami and nuclear crisis, collectively Japan’s worst disaster since World War II. Some 19,000 victims perished and a further 315,000 either lost or were forced to flee their homes (300,000 are still lodged in temporary housing). I was living in Japan in 2011 (though was vacationing in Hong Kong on the day of the earthquake) and I witnessed firsthand the shock and sadness permeating the whole country as the scope of the tragedy became apparent. Yet almost immediately a wave of compassion, support, and encouragement (ganbatte!) spread across the nation, and survivors showed unbelievable resilience as they pushed through their personal anger, confusion, and heartbreak to work together for the good of their neighbors and communities. Today is surely a somber day for the country, as citizens mourn individuals, families, homes, schools, businesses, and entire towns lost to the catastrophe. But I also know today is a day of renewed hope and determination for the Japanese people, as they are wholeheartedly committed to rebuilding and revitalizing the devastated areas as quickly as possible. To all of those still struggling with loss, I offer wishes for comfort, peace, and hope. To all of those involved in the ongoing recovery efforts, I send prayers for continued guidance, strength, and endurance. Above all, I wish the people of Japan shiwase.