RSS
← I ain’t skeered…well, maybe a little
The week in review →

To soothe the savage beast 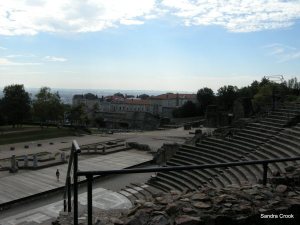 In the darkness of the wings, Marcellus was nearly swept up as the tsunami of the third grade chorus rushed offstage, trailing nervous energy and holiday anticipation in its wake. Tugging one final time at his tie, the young soloist moved toward his center-stage mark. Stabbed by the spotlight as the curtain rose, Marcellus felt his stomach churn violently and sucked in a breath, certain his chicken nuggets were about to make an encore appearance. Instead, the purest, clearest notes spilled from his lips, immediately stilling fidgety parents impatient to get home before the roads iced over. ”O holy night…”

Honestly, I’m not trying to rush the season in this little story for Friday Fictioneers, but the lone figure on the “stage” at L’Amphitheatre des Trois Gauls (Lyon, France) in Sandra’s photo this week made me think of elementary school Christmas pageants.

Posted by dreaminofobx on October 11, 2013 in Challenges, Fiction

← I ain’t skeered…well, maybe a little
The week in review →

5 responses to “To soothe the savage beast”