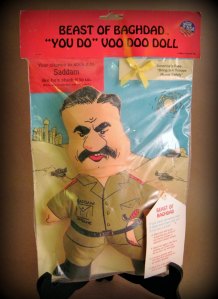 Question 22 (The Book of Questions by Gregory Stock)
If you could use a voodoo doll to hurt anyone you chose, would you?

I have, in fact, used a voodoo doll to try to hurt someone, but apparently I really suck at it.

The first Gulf War erupted when I was a freshman in college, and it was really the first time in my life I was aware that our troops–men and women about the same age I was–were fighting in a war and might not come home. It made me mad, it made me sad, and it scared me.

I’m not sure now how I came by the “Beast of Baghdad” voodoo doll, but I had no qualms about using it if there was even the remotest possibility that it would mean our soldiers could come home soon and safely. I hung him on my wardrobe door, where anyone who visited my dorm room could see exactly what I thought of the Iraqi leader.

I pinned the hell out of Saddam. By all rights he should have fallen over in complete agony somewhere in the desert sands, grasping at his eyes, his head, his heart, his genitals. I added new pins daily. I twisted the old pins. I invited friends to take a stab. If my doll had been effective, Saddam would have thrown himself in one of those hideous Kuwaiti oil well fires, just to end the torture.

Since I obviously don’t have the skills necessary to effectively use a voodoo doll to hurt someone, I don’t think I’d bother even going through the motions now. Besides, I’m usually pretty peaceable by nature, and don’t generally wish anyone physical harm. The “Beast of Baghdad” was just a tool to vent my frustration with a situation that was otherwise out of my control. That being said, if someone were to market an Edward Snowden voodoo doll…

Posted by dreaminofobx on July 11, 2013 in Deep Thought Thursday

← Pack your bags…slowly
An incomplete history →

2 responses to “Who do voodoo? I do voodoo!”