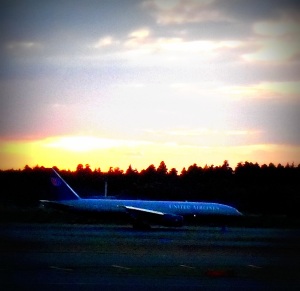 Annabel rose and peeked out the bedroom window. Barest hints of dawn were just visible on the eastern horizon. Curtains settled back into place as she turned away from the view. Days ago, she’d dreaded each sunrise, as it meant another eight hours shackled by a headset to a desk in a windowless cubicle. Eagerness was not a feeling to which she was accustomed. Finally, this morning she was waking with a sense of purpose and anticipation. Gently, so as not to wake her sleeping husband, Annabel padded down the hallway to get ready.

Her resumé had seemed woefully inadequate when, on a whim, she’d responded to the help wanted ad. Instead of waiting weeks for a call that never came, she’d been summoned almost immediately to the magazine’s head office for an interview. Just as surprisingly, she’d been hired on the spot and given her first assignment.

Ken, bless him, had been totally supportive since she’d first mentioned wanting to change careers. Loosening the plane ticket from her clenched fist the evening after the interview, her husband had cynically eyed her inaugural destination. “My, my, they’re certainly flinging you to the far corners of the world!”

Now, emerging from the shower, Annabel swiped the steam off the mirror with her towel. Outfits had fallen by the dozen last night as she’d agonized over what to pack and, more importantly, what to wear today. Piling her hair in a chic knot at her nape, she stood back and critically eyed her reflection. Quite respectable for a newly minted travel writer, she thought.

Retracing her steps to the bedroom, she carefully placed a kiss on Ken’s forehead as he slept. Silently she crept to the front door, slung her bags over her shoulder, and slipped off the porch into the waiting taxi.

“To the airport, please.”

“United Airlines flight 897 to Beijing is now boarding at Gate 37.”

Very nearly 24 hours’ travel lay ahead of her. Wheeling her carry-on down the gangway, Annabel contemplated the subject of her debut article. Xiamen Piano Museum had gotten enough positive reviews on tripadvisor that her employer had decided it worth a feature article in the upcoming issue. Years of banging the ivory at her parents’ insistence would hopefully ensure she had the background knowledge to do the piece justice. Zipping her Chinese phrase book back into her bag, Annabel settled into her assigned seat and envisioned a day in the very near future when she’d open the inflight magazine to see her own byline staring back at her.

The Daily Post from July 27 instructed: Create a short story, piece of memoir, or epic poem that is 26 sentences long, in which the first sentence begins with “A” and each sentence thereafter begins with the next letter of the alphabet.