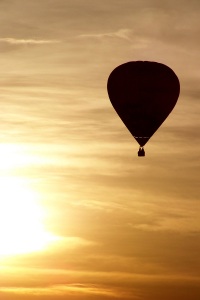 The sunset flight had been her birthday gift to him last week, and his face had lit up at the thought of crossing one more thing off his bucket list; he really needed to start adding to the list so as not to be bored senseless in his old age.

She had perused customer reviews on the balloon company’s website and studied ten years of meteorological data, trying to find a window of opportunity when cancellation due to weather was least likely, then finally just closed her eyes and pointed to a random square on the calendar.

She’d regretted her impulsive selection process when the sound of rain pattering against the windows awakened her before the alarm this morning, but the showers had passed before she’d even reached the bottom of her ritual mug of Earl Grey and the balloon pilot had rung at lunchtime to confirm their flight would depart as scheduled.

As they drifted silently above a breathtaking patchwork of carefully tended fields, bisected by an undulating ribbon of sparkling gold, the pilot gave a slight nod and she raised her glass of complementary champagne to toast the dwindling bucket list.

Then, with only a moment’s hesitation, she turned her face into the sun and tipped her husband over the side of the wicker basket, a new widow’s tear-choked prayers following his ashes as they billowed out in the balloon’s wake.

“Five Sentence Fiction is about packing a powerful punch in a tiny fist,” says Lillie as she offers up her weekly challenge on Lillie McFerrin Writes. The word she chose for this week’s inspiration was ‘flight’.

Posted by dreaminofobx on July 9, 2013 in Challenges, Fiction, Tuesday Tales