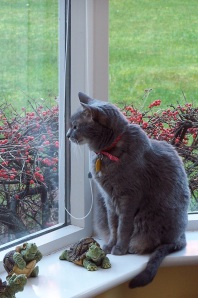 Until a year ago, when some form of evil kitty cancer stole her, I had a lovely cat named Alina. She was strictly an indoor kitty, as her former owner had already had her front paws declawed when I adopted her from the SPCA. But even if she hadn’t been declawed, she still would have been an indoor kitty. I wanted a companion to sit on my feet while I worked in the office, a silent friend to listen without judgement when I talked to myself, a warm furry body to purr by my side on those nights when the hubby was away on business…and the cat would need to be inside to fulfill all those wishes. Tell me, what is the point of having a HOUSECAT if it is going to live outside?

Unless you have a farm and need a cat to hunt the mice that are stealing grain from your barn, I don’t understand the rationale for putting a cat outside. Why have a pet if you never see it? The Humane Society of America says that free-roaming cats live, on average, less than five years, compared to a life-span of around 17 years for indoor cats. Outdoor cats don’t die peacefully or painlessly; they are killed primarily by cars, but also by poisoning, animal attacks, traps, human abuse (you’ve heard that serial killers often start with animals, right?), exposure, and disease. With all those risks, it seems that only an irresponsible or uncaring owner would allow his/her cat(s) to wander around outside.

Plus, outdoor cats can really piss off the neighbors. Despite my general love of cats, I am quickly growing to despise the black and white feline that roams my neighborhood. First of all, it is a snob. It scorns all my gestures of friendship and trots off, snooty nose in the air, whenever I approach, which really hurts my cat-lover feelings. Secondly, it has crapped in every one of my flower beds–there’s nothing quite as revolting as the smell of cat feces emanating from my gardening gloves because I innocently scooped up a pile of dead leaves from under the rose bush. (Despite online reports, lavender is NOT a deterrent, as I have two thick rows of it on either side of the front walkway that are hiding plenty of evidence of its uselessness underneath.) Thirdly, the cat routinely sprays my car tires, marking its territory and making it impossible for me to roll down the windows on the back country roads without gagging. (If I didn’t live in a land of 240V mains electricity, I’d consider stealing a page from my grandfather’s book and hot-wiring the hubcaps as a deterrent.) Finally, and worst of all, the neighborhood cat kills the birds in my garden. Last year, I came back from a family-emergency trip to the States to find a decapitated pigeon on my patio. (I’m guessing the head was on a bedpost somewhere.) Ewww. This afternoon, I looked up from the kitchen sink to find it murdering a sparrow in the back yard. So now I’m officially a pissed-off neighbor.

If you are going to have a cat, keep it in the house–not only for the health and safety of the cat, but for peace and goodwill among the neighbors.

Blogs I commented on today:
Spirit Animals (Underachievers Anonymous)
There Is No Tragedy in Falling (…So Help Me Cats)
A La Ronde, Exmouth Devon (Anglers Rest)  new blog of the day

Posted by dreaminofobx on May 8, 2013 in Observations, True Life, What's She On About?