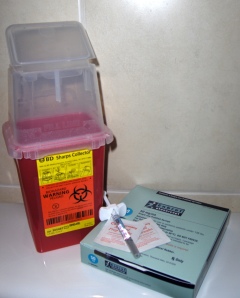 It’s Thoughtful Thursday, and time for another random question from The Book of Questions by Gregory Stock, PhD.

Question 5
If a new medicine were developed that would cure arthritis but cause a fatal reaction in 1 percent of those who took it, would you want it to be released to the public?

Funny that Dr. Stock has chosen arthritis for this question. I happen to have rheumatoid arthritis (RA), which is an autoimmune disease that causes my body to attack its own joints. I was diagnosed in 1994, two months after my college graduation. At first, the symptoms were mild—a couple stiff fingers, a slight twinge when I rotated my wrist, a vague feeling of fluid in my knees. I had a pretty physical job at the time, so I chalked it all up to overuse, took a couple Advil, and carried on. Within a couple weeks I was popping four Advil every two hours to just barely take the edge off the pain and swelling that were wreaking havoc with my fingers, wrists, elbows, knees, and ankles. I knew there was something more than overuse to blame, so made an appointment at a medical office where a PA told me I had a virus and should drink plenty of water. I suffered another week before going back for a follow-up, barely able to get into the car on the day of my appointment because I couldn’t bend knees swollen to the size of volleyballs or turn the key in the ignition without tears of pain streaming down my face. Finally, a blood test earned me a referral to a rheumatologist who diagnosed RA and started me on a cocktail of side effect-laden drugs.

I was lucky. Prednisone (a steroid known to cause osteoporosis with long-term use) is GREAT stuff, and eliminated the pain and swelling in my joints within about 30 minutes of my return from the pharmacy. It continued to work its magic for several months while the long-term regimen of Ansaid (a nonsteroidal anti-inflammatory drug known to cause intestinal bleeding), Plaquenil (a disease modifying antirheumatic drug known to cause eye damage), and methotrexate (a chemotherapy agent known to cause liver damage) had time to build up in my system and suppress my immune system. Within six months, I looked and felt like a normal human being again, so I was happy to overlook any and all possible long-term side effects. Coming off the prednisone was a long, arduous process, but in about eighteen months I was finally able to do it. For the next twelve years, I continued on the Ansaid, Plaquenil, and methotrexate, and was doing so well that my rheumatologist believed I was in remission and encouraged me to begin weaning myself off all of those medications. I was drug-free for nearly a year before symptoms began to reappear, and I gradually added back all of the old medications, ramping up to and surpassing my previous dosages to try to control the flare. When it became obvious that the old drugs were no longer working, my rheumatologist started me on self-injected Enbrel, a TNF inhibitor that is one of the new biopharmaceuticals designed to treat autoimmune diseases. Again, I was lucky, and as soon as the Enbrel kicked in, I was able to eliminate all of the other medications once more. I’m now symptom-free as long as I continue my weekly (or biweekly if I’m feeling really good) injections. The trade-off is that treatment with Enbrel means I have an increased risk of developing a serious infection that could lead to hospitalization or death, and also a “several-fold” increase in the risk of developing lymphoma compared to the general population.

So, back to the question. I am interpreting it to mean that a single treatment would cure the arthritis—gone, completely and forever—with no side effects to worry about down the road, and that for the unfortunate 1 percent, death would come immediately after taking the medication. Therefore, I say absolutely, release it to the public. I’d be first in line to take it. For me, the one in a hundred chance of immediate (and I’m also assuming quick and painless here) death is a small worry compared to wondering every time I inject myself if this’ll be the dose that kicks off some horrible infection or lymphoma. A quick death as one of the 1 percent doesn’t sound as terrible as a long, agonizing, and ultimately unsuccessful battle against infection or cancer. And the other 99 percent, some of whom have likely not experienced the same success in eliminating their symptoms as I have, would have their lives back. They could once again take a walk, open a door, wrestle on the floor with their children or their pets, play the piano or the fiddle or the saxophone, twist off the cap of a cold beer, knit a sweater, assemble IKEA furniture, cut up their own steak, hold a toothbrush, run up the stairs, dig in the garden, button their jeans, turn on a lamp, tie their shoes…

Posted by dreaminofobx on March 21, 2013 in Deep Thought Thursday, How It Is, On Me, True Life