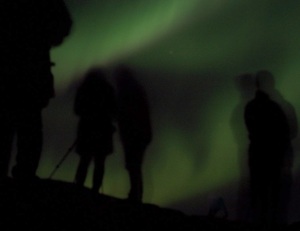 I’ve got a bucket list that I started compiling during college titled, “100 Things To Do Before I Die.” There aren’t actually 100 things on the list yet–at 20, I thought it pretty conceited to presume that I knew enough about life and all the world had to offer to just scribble down a hundred dreams off the cuff. Even now at 40, I’m still reluctant to round out the list. However, one of the items I was sure of, even as a naïve undergrad, was my desire to see the Northern Lights.

We’ve just returned from four nights in Iceland, a trip carefully plotted to fall near the spring equinox because auroral activity typically peaks then (we did not know at the time that NASA had declared 2013 the year to see the Aurora Borealis thanks to a 50-year spike in solar activity). Saturday’s Northern Lights tour, which turned out to be more of a glorified hunt party, was included as part of our holiday package. Four busloads of eager tourists, armed with wide angle lenses and sturdy tripods, set out from Reykjavik at dusk to cap off a day that had been dominated by cloudless crystal blue skies; our local guides were forecasting the most spectacular display of Northern Lights of the season. As we drove away from the city lights, a low bank of clouds gathered over the mountain tops and proceeded to engulf the stars almost as fast as they appeared. Undaunted, and armed with four different meteorological reports that promised clear skies across the entire island, our fearless guides continued on to the night’s pre-selected viewing location in the national park. Gamely, we all tromped off the buses into the biting cold and spent the next hour watching the thickening clouds blot out every last star in the sky. Not ready to give up, our guides herded us back onto the buses with the promise that sources on the south coast were reporting clear skies overhead and we should move quickly to that location. Alas, upon arrival, visibility there was just as poor and the cold was even colder, so around midnight the guides finally admitted defeat and shepherded us back to our hotels, reminding us of the company’s policy to take us out again the next night (and the next, and the next…) until we finally spotted the Aurora Borealis.

Sunday dawned just as bright and cloud-free as Saturday had, so after a day spent paddling around the 100°F waters of the Blue Lagoon to chase away the lingering chill of the previous night, we once again bravely layered on all the clothing we had packed and joined the throngs for another evening of stalking. Our buses headed north out of the capital city under tantalizingly clear skies, and as the miles passed and darkness descended, we watched star after star appear magically in the heavens. Our guide alternated between apologizing for the previous night’s fiasco, disparaging the forecasting and observation skills of the various weather and space authorities the company consults when planning these nightly tours, and meekly offering optimistic promises for the evening’s success. An hour into our 90-minute drive, skies were just dark enough for the first glimmers of the Northern Lights to be visible in the skies ahead of us. The level of excitement (and relief) in the bus ratcheted up with each sighting, and we all tried to pay close attention to the guide’s tutorial on the best camera settings to capture our experience. By the time we finally alit from the bus, the sky was fairly dancing with ribbons of light. It took every last bit of self-control to allow my night vision to become fully functional before running pell-mell up the lava strewn path to claim a spot on the hill for my tripod.

This being only the second time I’ve ever used the manual settings on my trusty and much-loved, but far from professional grade, digital camera, I can’t claim any postcard-worthy shots of the lights (got everything adjusted but the ISO, darn it). While I’ve only got some blurry physical proof that I was there, the entire show is etched indelibly in my mind. Light danced across the sky like the first snowflakes that fall on a cold highway, swirling gracefully across the blacktop in the wake of the car ahead. Ribbons stretched downward into curtains, undulating back and forth like veils in an unseen breeze, their sheer green panels edged in purple and red. More than once, extremely rare (according to our guide) coronas appeared directly above our heads, the shimmering aurora radiating out in all directions from a central halo and occasionally bisected by shooting stars. Light literally flowed across the sky in rivers that brightened and faded, disappearing from the left or behind us and reappearing on the right or in front of us. There was no wrong direction to look, and if my joints had not been so stiff from the cold that I feared not being able to get back up, I would have lain flat on my back on that razor sharp bed of lava in an attempt to take it all in at once.

When the guides finally declared it was time to pack up and head back to Reykjavik, not a single passenger remembered the crushing disappointment or freezing discomfort of the previous night. As our bus headed back to the hotel, our guide was just as ecstatic as we were, assuring us that we had just witnessed the most brilliant display of Northern Lights in Iceland in a full year–high praise from someone who does this every night during the season.

Standing in the check-in line at the airport this morning, strangers offered each other the display screens of their digital cameras, and all of the small talk centered around one burning question. “Did you see the lights last night?”

Posted by dreaminofobx on March 18, 2013 in How It Is, Monday Mix, Observations, True Life

One response to “Check!”