The not so friendly skies 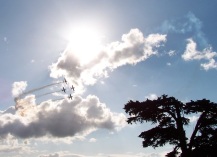 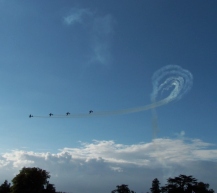 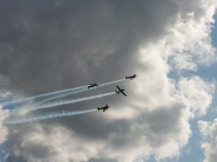 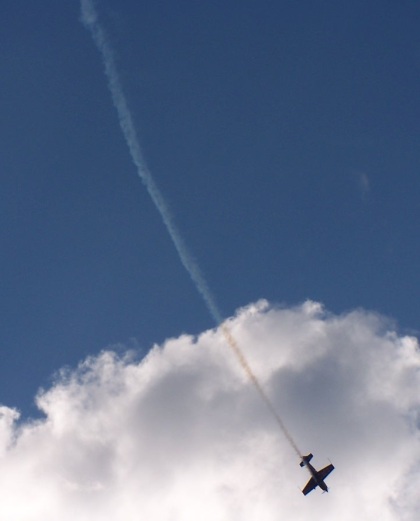 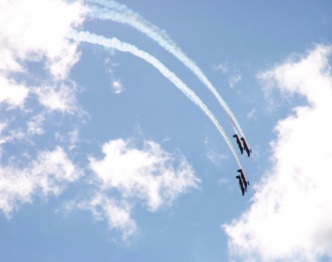 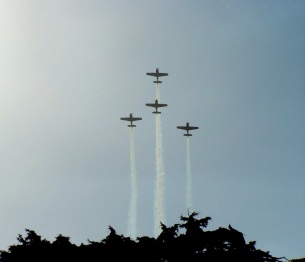 Day 3: Things that make you uncomfortable

Several scenarios, both trivial and substantial, that routinely make me uneasy crossed my mind when I first pondered this prompt: walking into a crowded room, talking on the phone, hearing racially/culturally insensitive remarks, passing a homeless person on the street…

But today I went to the Battle Proms (a summer concert series) at Highclere Castle (where they film the BBC/PBS drama Downton Abbey) and found myself in a previously undiscovered disturbing situation.

The Blades Aerobatic Display Team, comprised of four highly experienced former RAF pilots, spent 15 minutes rolling, spinning, climbing, diving, twisting, tumbling, racing headlong at each other, stalling, and free-falling DIRECTLY ABOVE a crowd of 9000 vulnerable, oohing, ahhing, champagne-impaired Brits. If the worst had happened, there would have been carnage. It was absolutely the stuff of my nightmares.

No, really. I have recurring nightmares of watching helplessly from the ground as a plane falls out of the sky toward me. Now there were four of my enemy overhead, threatening to turn my dreams into reality. Nauseous and shaking, I didn’t know whether to keep my eye on the sky or run for cover.

Watching the video of the display from my husband’s iPhone this morning, I could fully appreciate the skill and talent of the pilots, the technical capabilities of the aircraft, and the beauty of their maneuvers without any of the paralyzing anxiety I experienced yesterday. I think I am meant to take in air shows from the safety and comfort of my sofa, not directly underneath the action!

Skin-crawling discomfort, brought to you by Jenni’s blog-every-day challenge at Story of My Life.

Posted by dreaminofobx on August 3, 2013 in Challenges, On Me, True Life