June 11 — something funny
Not entirely playing by the rules of Chantelle’s June Photo a Day Challenge, since I did not take these photos–rather, I am the star of the pictures. At the time, I saw NOTHING funny about the situation, but looking at them now (and hearing my husband’s account of the day) makes me laugh until tears run down my face and I have to shuffle with crossed legs to the bathroom. Thanks to the photographer at Bali Action Adventure who controlled his own laughter long enough to capture these moments.

Despite being a distinguished veteran of the US Navy, my husband does not like water (uh, hon, did they not tell you when you enlisted that that particular branch of the armed forces spends a great deal of time on or near the water??). Therefore, I was quite concerned about how he’d handle our first ever whitewater rafting trip while vacationing in Bali. Better than me, as it turned out.

My life flashed before my eyes right out of the gate, when the guide steered our little dinghy under a waterfall at the launch point, flooding and sinking my position at the front end of the raft, and nearly sending me overboard before we even left the launch pool. Spluttering and choking, taking inventory to see if I still had my helmet, my sunglasses, my paddle, I wondered if it was too late to call the whole thing off.
Me: “WTF!? Was that really necessary!?”
The hubby: “Hahahaha! Hahahahaha!” 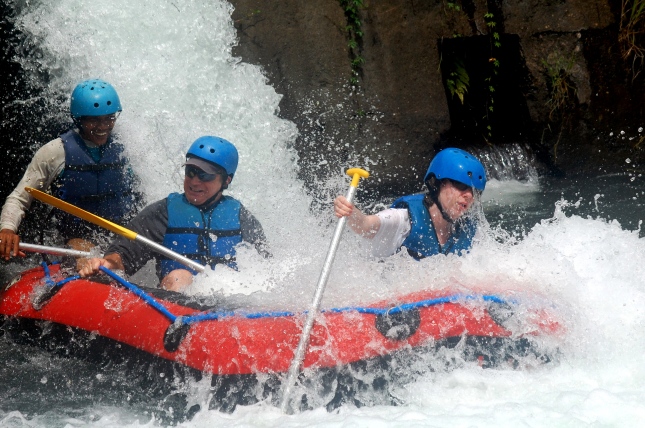 Notice who is NOT laughing at the beginning of the journey.

The farther down the river we traveled, the more pissed off I became, since I had been instructed to sit on the canvas bottom of the raft rather than on the cushy inflatable seat (as near as I could tell through the guide’s Balinese accent, I was too tall to sit on the seat and he couldn’t see where we were going). There is nothing but a single layer of unpadded canvas in the bottom of an inflatable raft. Whitewater happens when the river rushes over huge rocks on the river bed. Guess whose backside slammed into every single one of those rocks?
Me: “Dammit, can you not see we are headed straight for that boulder!?”
The hubby: “Whoo hoo! This is great! Paddle left! Paddle right!”

Fast forward a couple hours…nearly the end of the journey. My backside is a throbbing mass of bruises, I’ve ripped off two toenails by jamming my sandaled feet between the floor of the raft and the inflated sides in an attempt to lever my aching butt away from the rocks, the canvas sidewalls have rubbed all the skin off the underside of my upper arms as I vainly tried to paddle from the floor of the boat. I am done, I want a shower, I want lunch. Then I see the final obstacle standing between me and dry land. A 10-foot high dam. I hate roller coasters, that terrifying freefall on the big hill, and on the rare occasions someone talks me into riding one, I absolutely refuse to sit in the lead car. Now here I am, perched in the front of a tiny little raft, about to go over the edge.
Me: “Oh [expletive].”
The hubby: “Awesome!!!”

As our guide steered us to our place in the line of rafts making the final plunge, he took our paddles, lashed them to the boat, told me to swing my feet over the front, and instructed us to hold on tight to the rope–no matter what happens don’t let go of the rope. The raft in front of us held two tiny little Japanese girls, and I was able to glimpse them bob, still inside the raft, safely towards the bank after they disappeared over the dam. If they survived, feather-light as they were, surely I’d be okay.

The raft sped toward the precipice, and as I do on every roller coaster, I screwed my eyes shut tight and held on for dear life. The bottom fell away, and I became weightless before my death grip on the rope yanked me back down to meet the floor of the raft. At exactly the same time, the nose of the raft met the solid wall of water at the bottom of the dam, and I was catapulted backwards, feet flying over my head, still anchored to the boat by the rope in my clenched fists. Only my eyes were closed, so I didn’t know what was happening. I thought the entire raft had flipped over, and I waited to be engulfed by cold river water, coaching myself to stay calm, to watch the bubbles once I entered the turbulent water so I could save myself by following them to the surface. I prayed the hubby would either do the same or hold his breath long enough for me to dive back down and find him. The guide could save himself…it was his fault we were about to drown in the first place. 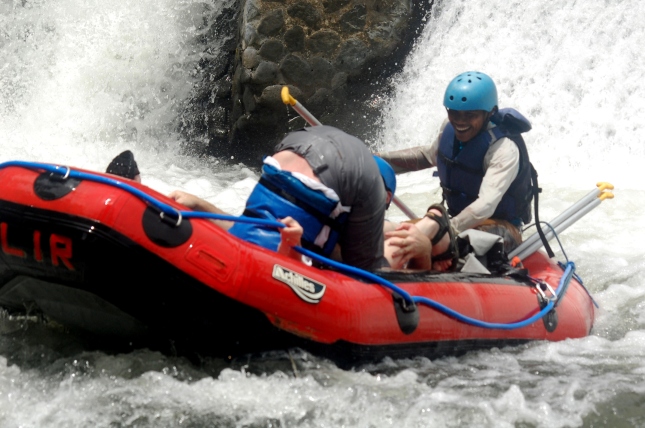 My best gymnast impersonation, with a perfect landing on the hubby. The guide gives it a 10.

The cold water never came, but suddenly my feet were launched forward and I was once again upright. Apparently, still anchored by my grip on the rope, I had flipped over like a gymnast on the rings and landed smack on top of the hubby’s head. Quickly determining why it had suddenly gotten so dark in his comfy little section of the boat, he had grabbed my ankles and hurled me back to my rightful position.
Me: “Get me out of this effin’ boat. NOW.”
The hubby: “Hahahahaha! Hahahahahahaha!! Hahahahahahaha!!!”
The guide (in a thick Balinese accent): “HAHAHAHAHA! HAHAHAHAHAHA!! HAHAHAHAHAHAHAHAHAHA!!!”