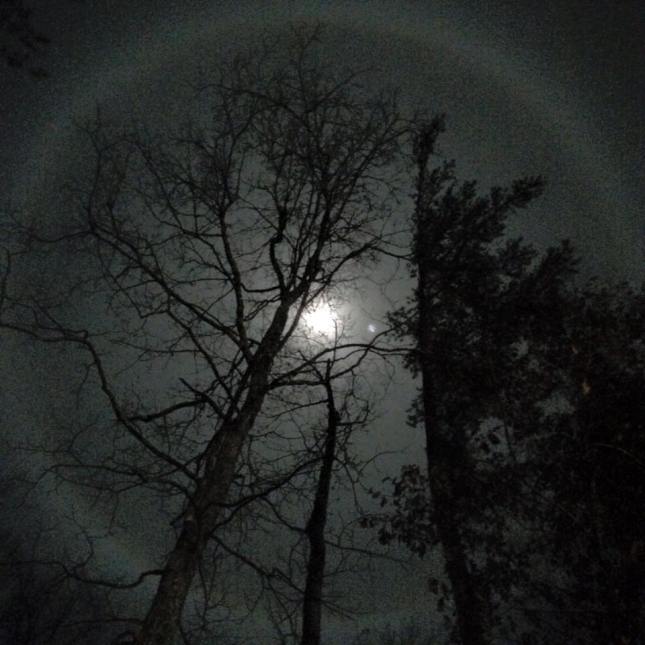 Long ago, before I knew better, I thought Christmas magic was a bulging stocking or the biggest gift under the tree. With age comes new perspective, though, and I feel blessed to now recognize and appreciate Christmas magic in less materialistic ways. A full moon on Christmas is a rare thing. The last one occurred in 1977…the next will be in 2034. I thought this 2015 Christmas moon was only going to be something I read about, as it’s been raining here for days, and the forecast still calls for low, thick clouds and an 80% chance of thunderstorms. Yet a bit of Christmas magic has occurred, and the clouds thinned enough around midnight for me to capture the above image with my iPhone. More magic–notice how the tree branches make the round orb of the moon look like a star? And even more magic–the perfect halo surrounding the moon is caused by tiny ice crystals in the high, thin cirrus clouds that still remain, not by some trick of the camera lens. 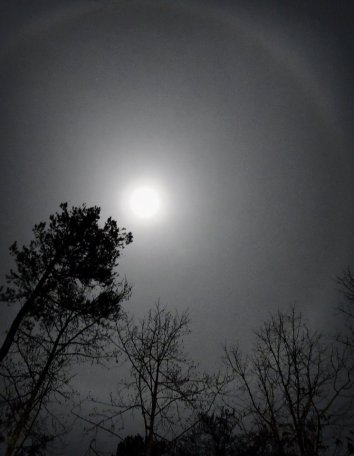 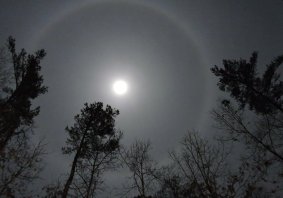 Posted by dreaminofobx on December 25, 2015 in Photography

The Oxford Canal ran through the small village where I lived in England. Whenever it wasn’t raining (and often when it was) I would wander down to the towpath that ran parallel to the canal, flip a coin to decide if I was going upstream or down, then spend an hour or so ambling along the waterway. I loved being there in the early mornings, when the water was glassy-calm and the narrowboat pilots were still too busy savoring their bacon baps and morning cuppas to cast off their lines and motor toward destinations unknown. Here are a few of my favorite reflections from those peaceful morning strolls (click on any image to see the full size version).

Who’d expect to see a teepee in England?

Narrowboats on a foggy morning.

The photo below is a bit of an optical illusion. With the exception of the portion of grassy bank in the bottom left corner, everything else is a reflection on the surface of the canal. What appears to be the sun rising over a foggy mountain is actually the sun peeking out from behind a cloud. There is a false shoreline through the middle of the photo, created by the reflection of a jet’s contrail. The skeletal tree limbs are also nothing but a reflection, although the top portion appears solid enough to be the actual tree (if you’re not convinced, notice there is no symmetry between the top and bottom half). 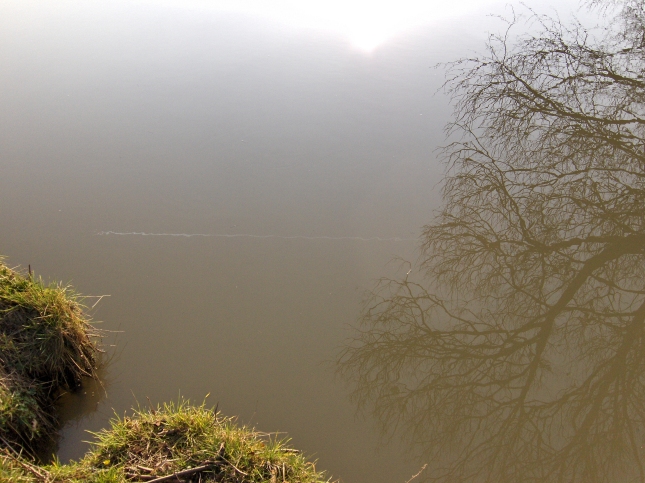 This post is part of The Daily Post‘s Weekly Photo Challenge. 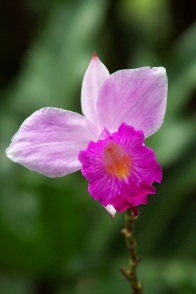 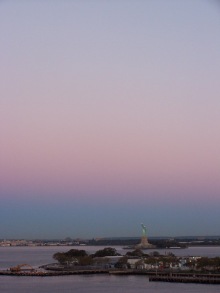 For some awesome shades of pink you’ve never seen in your box of crayons, visit Ailsa at Where’s my backpack?

Posted by dreaminofobx on March 24, 2014 in Challenges, Photography

Tōdai-ji, the Eastern Great Temple, in Nara, Japan, houses the world’s largest bronze statue of Daibutsu. The statue is protected by an enormous wooden structure, the Daibutsuden, or Great Buddha Hall. A hole has been carved through one of the massive wooden pillars that support the roof of the hall; the opening has the same dimensions as the nostril of the Buddha statue. Visitors of all ages find great joy in trying to squeeze themselves through the replica of Buddha’s nostril. 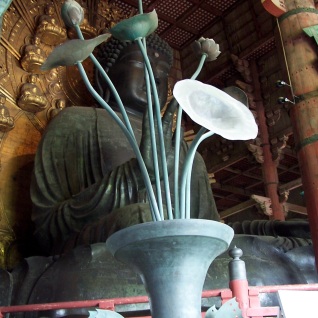 Find more interpretations of “inside” at The Daily Post.

As we dig out from yet another snowstorm here in Virginia, it’s a little hard to believe that we’ll ever see our gardens again, much less have weather nice enough to work in them. Looking through my archives for material for Ailsa’s garden-themed photo challenge at Where’s my backpack? has brought a nice respite from the cold, bleak winter weather, and planted seeds of hope for the coming garden season. 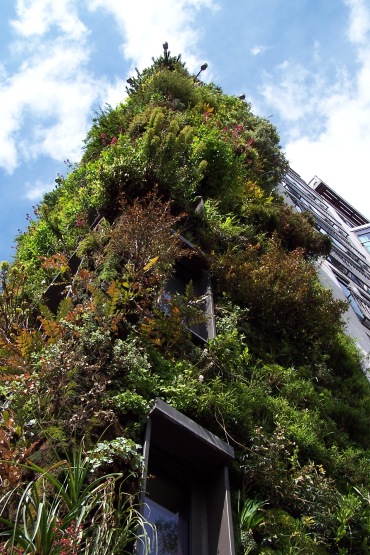 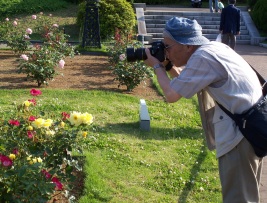 Floating back porch garden along a canal, Bangkok, Thailand

Bellying up to the bar, Butterfly Garden at Sentosa, Singapore 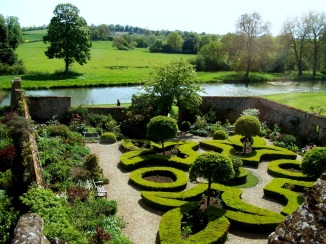 Posted by dreaminofobx on March 17, 2014 in Challenges, Photography

I’m an American. Relatively speaking, America is a very young country. So when Ailsa at Where’s my backpack? issued her “ancient” photography challenge this week, I really got to thinking about how the place where a person is raised can affect that definition. As an American, living in this relatively young country, pretty much anything older than 100 years seems ancient to me (apologies to the fine folks on Willard Scott’s Smuckers jars each morning). I know by formal definition that existing for a century hardly qualifies something as ancient, so I dug through my archives to see if I could find anything that really fit the bill.

First stop, ironically, is in America! While in Hawaii in 2004, the hubby and I visited Halemaʻumaʻu Crater on the big island. In the light of the sinking sun, we were the only two at the crater. In fact, save for a few hardy plants not phased by the inhospitable soil or sulfurous gases, the whole area seemed fairly lifeless. But at the edge of the crater, I spied a pineapple on a bed of palm fronds, offered up, no doubt, by a native Hawaiian practicing an ageless ritual, and I immediately felt we had been transported back in time.

Plea for respect for ancient traditions. 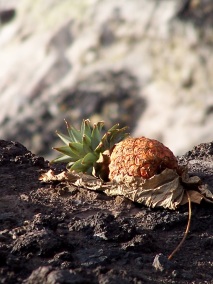 An offering to the gods, part of the ancient traditions.

While I was living in Japan, a rather fierce windstorm roared through the Kanto area March 9-10, 2010. An ancient and much-revered ginkgo tree on the grounds of Tsurugaoka Hachimangu Shrine in Kamakura succumbed to the gale and was found uprooted early on March 10. So great was the love for this 1000-year old tree that experts scrambled to find ways to save it. A large section of the trunk was sawn off and planted next to the original roots, which were righted and set back in their original location. By the time I visited the shrine with my mom in November 2010, leafy shoots were vigorously growing from both the transplanted trunk and the original roots. It was impossible not to be moved by the hand-written sign next to the thriving remains of the ginkgo, encouraging the new shoots on the once-majestic trunk to “Ganbare!” (go for it, you can do it). 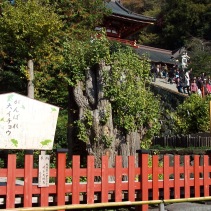 On this spot stood a 1000 year old ginkgo tree.

Efforts to revitalize the tree include uprighting the original roots (left) and transplanting a portion of the trunk (right). 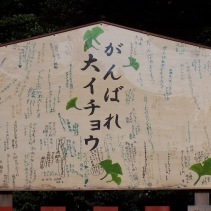 One of the most truly ancient sites I have ever seen was the Skara Brae settlement on the wind-swept shores of Orkney in Scotland. Discovered purely by chance when a vicious coastal storm in 1850 washed away the sand that had covered the village for centuries, archaeologists have now painstakingly excavated the settlement. It was very surreal to look down into the remains of a 5,000 year old home and see so many similarities to my own modern-day home, like the dresser on which they proudly displayed their most-treasured items.

Overview of the Skara Brae site

Reconstructed model of an ancient dwelling

Posted by dreaminofobx on March 3, 2014 in Challenges, Photography

The photo challenge issued this week by the Daily Post stems from last week’s instructional post regarding three-picture stories. In short, the idea is to capture a scene from three different vantage points, giving the audience a broad overview, then a closer look at some relationship within the scene, before homing in on a more intimate perspective on a key element. I’ve pulled three photographs that I took of Daibutsu, the Great Buddha, in Kamakura, Japan. Click on any image below to view it full-sized. 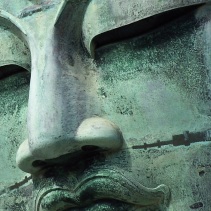