Daily Prompt: On the road to Orkney

If I could pause real life and spend some time living with a family anywhere in the world, I’d go back to Orkney in a heartbeat. I even know whose home I’d crash…Stuart, of John O’Groats Ferries, watch out!

The hubby and I were able to spend nearly two weeks in Scotland in the summer of 2012, and basically did a big loop of the country, from the southwest clockwise around to the southeast. At the northeasternmost point of our loop, we boarded a ferry and left the mainland for the islands of Orkney. We only had one day to explore, so we booked a guided day tour to maximize our sightseeing experience.

From the moment our ferry docked in the foggy, windswept harbor, I was hooked. Something about the place immediately spoke to some primal corner of my soul, long before our tour guide even introduced himself or began unveiling Orkney’s multifaceted story.

Our guide, Stuart, was not a native Orcadian, but he was married to one. As a result, he had extensive knowledge of the history, geology, geography, archaeology, people, customs, and culture of the islands. He crammed as much as he possibly could into the 10 hours we had together during the tour, and with every story he told I fell deeper in love with Orkney.

I’d dearly love to return to Orkney, to spend some time exploring and researching on my own. But at the end of the day, I’d like to crash at the home of Stuart and his wife, coaxing more anecdotes about the islands out of them, using their tales to guide my next day’s adventures.

I want to diagram a timeline of the events that explains why the Orcadian flag looks so Norwegian. 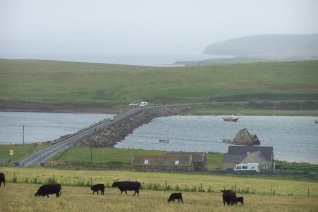 I want to hear more about why cows replaced chickens as the primary livestock in 1952.

I want to be a chaperone when a group of school kids take their annual field trip to this stand of trees. 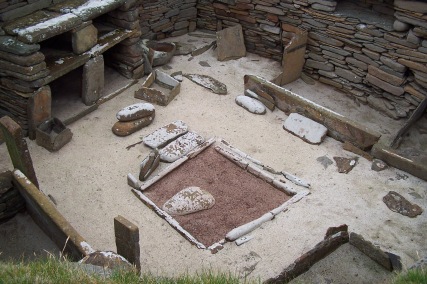 I’d like to take part in further excavation of Skara Brae, a 5000 year old settlement.

I need to see a map to understand how the fishing industry was cut off by the causeways.

I want to hear more about what happened to the rest of the stones in this oldest stone circle in Scotland.

I want to explore the crooked little streets of the two main towns, Kirkwall and Stromness.

I’d like to read the tombstones in St. Magnus Cathedral.

I’d like to study Orkney’s role as harbor for the home fleet during WWI and WWII.