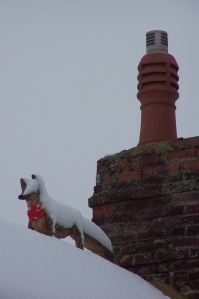 In the past few weeks, I’ve seen foxes slinking around in broad daylight in several local fields, and the first thought that’s come into my head is, “I wonder if they have rabies.” Foxes are known for their skills as nocturnal hunters, and my perception of them as night creatures is reinforced any morning I drive to work and see a dead one on the side of the road that was not there the previous evening. But apparently it is not uncommon for foxes to be just as active during the day—guess the population is just denser here than I’m used to in Virginia, so I’m liable to see more. And besides, rabies has been eradicated from the United Kingdom’s animal population.

That doesn’t mean foxes are harmless, however, especially the 10,000 or so urban ones in England’s capital city.  Reminiscent of the infamous cry, “A dingo ate my baby,” a neighbor reported hearing a mum screaming, “A fox attacked my baby” just last week in the suburbs of London. A four-week old baby boy was reportedly snatched from his cot by a fox and dragged to the floor, where the infant’s mother kicked the animal until it dropped the baby’s tiny arm from its jaws and fled. For me, this story begs the question, how did the fox get into the house in the first place? The weather has been wet and cold for the past several weeks, so I wouldn’t think a conscientious mom would leave a window open in the baby’s room. (An window open to the summer—I use that term loosely—breeze was indeed the culprit in a June 2010 attack, in which nine-month old twin girls were mauled by another urban fox.) After much digging, I found one news agency that stated the fox had entered through a broken back door, and that the family has been rehoused by the council as a result. (Council housing is provided to low-income Britons, who often end up paying little or no rent thanks to a government Housing Benefit scheme, and with regards to upkeep and general aesthetic appeal, the properties generally fit your stereotypical image of low-income housing.) Happily, Baby Denny was moved from intensive care to a regular ward at the hospital today, where he continues to recover from last week’s four-hour surgery to suture lacerations on his face and arm and to reattach a severed finger on his left hand.

Experts say fox attacks are “incredibly rare,” but as more and more of the animals inch closer to humans and the easy food source of unprotected garbage cans, the likelihood of finding the cunning critters in one’s suburban home increase. Whether they are dragging last night’s chicken carcass out of the kitchen bin or hauling small children off to feed the kits waiting back at the den, it’s bound to be a nasty surprise. Just one more reason the Brits should consider adopting the American practice of putting screens on their windows!

Posted by dreaminofobx on February 11, 2013 in Uncategorized

One response to “Sly”