Two things you need to know about me before I start this tale. 1) I HATE running, and 2) six months ago, I eliminated almost all of the wheat from my diet (as in, I’ll still occasionally eat a chicken nugget from Chick-fil-A, but now consistently avoid pasta and order burgers in a lettuce wrap).

The hubby and I ran our first 5K on Sunday. Weeks ago, long before I had even worked up to two full miles of non-stop running, I was already plotting how we would celebrate if I managed to run the entire distance on race day. Being highly motivated by food rewards, especially “forbidden” ones, I decided that nothing less than a full French toast breakfast from Cracker Barrel (Warning: wheat, wheat, wheat) would appropriately mark such a momentous accomplishment.

Lying in bed Saturday night, picturing myself panting across the finish line the next morning, then immediately visualizing a fork guiding a bite of buttery, syrupy French toast to my mouth, I got to thinking about what random act of kindness I could perpetrate while we were out on Sunday. I came upon the idea of anonymously buying breakfast for a cute older couple, perhaps sending their waiter/waitress over with a note wishing them a happy Sunday in place of their check. 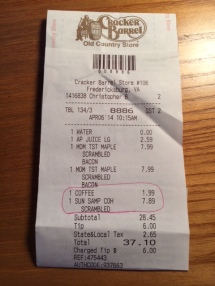 Well, Sunday came, the race was run (run, not walked…yay, me!), and French toast ensued. Cracker Barrel was filled to bursting, but nowhere in the entire restaurant could I find the cute older couple I had envisioned. So then I switched gears and began looking around for someone(s) who might be voted “least likely to have a stranger buy his (their) breakfast.” Bypassing the lovely family of eight at the big round table in the corner (I did set myself a budget for this month-long project), I spied a 30-something guy dining alone. Judging the book solely by its cover, I didn’t figure many people would voluntarily step up to do something kind for him..in fact, I rather felt like most would have crossed to the other side of the street if he’d been approaching on the sidewalk. I suspected that his build, choice of clothing, and number of visible tattoos would have immediately roused in the average Joe unease, distrust, and judgmental speculation about his personality and/or behavior. Unless some sixth sense is screaming at me, I tend to believe that everyone around me is inherently good, and I work under that assumption until they prove otherwise. No warning bells went off as I surreptitiously observed this guy’s interaction with his waiter, and I was convinced he was the one I wanted to treat to breakfast.

Happily stuffed to the gills with Momma’s French toast breakfast, I asked the waiter to bring me the lone guy’s bill along with our own. He was momentarily confused as I whispered that I did not want him to tell the man who in the dining room had paid for his breakfast. Trying to appear not the least bit interested while straining to hear the conversation, I peeked from the corner of my eye as the waiter told our fellow diner that his bill had already been taken care of and he was free to go enjoy his day, a message that had to be delivered more than once before it was believed. I hope he walked out into the bright Sunday morning feeling happy, and perhaps even considering how he might pay the RAoK forward.

In an attempt to overwrite all the negative feelings I have about April, I have made a pledge to complete 26 random acts of kindness this month. Reporting on these acts is the theme of my participation in this year’s April A to Z Challenge. If what you read here inspires you to commit your own RAoKs this month, please share what you’ve done in the comments. Together, we can rewrite April’s legacy!

If you’d like to check out how some other bloggers are responding to the A to Z Challenge, click here. Beware, there are 2165 participants at the time of this posting…I accept no responsibility for the hours you are likely to lose once you start browsing! 🙂

Posted by dreaminofobx on April 10, 2014 in Challenges, True Life